Hriňová in the Past and Today

A Recollection from the Chronicle of the Factory PPS Hriňová 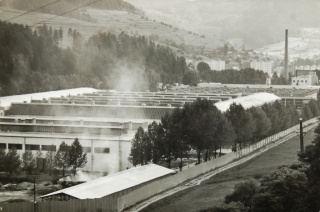 Motto: We had lived through beautiful and happy times, faithfully we did serve Podpoľanie...

I am writing these lines in the name of those, both alive and dead, who in the years 1950-1990 put all their efforts, ability, and enthusiasm into making life under Poľana more beautiful and happy. Let history judge our actions!

I believe that history will be without prejudice and just to us, and will give respect, honour, and glory to the lives and labours of those who turned an impoverished Podpoľanie – and in it the town of Hriňová – into an industrial region with complex infrastructure.

Forty years. Merely two generations, a brief period which can at best stand for a short line inside historical records, and yet, the positive changes effected during those years highly exceeded any realistic aspirations of the people under Poľana.

I am one of those who lived a significant part of their lives enthusiastically building up and developing our factory and town. It was not always easy, nothing was given to us without determined and honest work – everything that has been constructed here is the result of expert, hard, and honest work. But let the facts speak in our stead:

We had inherited one of the most backward corners of Slovakia. If we omit the local sawmill which employed about 100 people, there were no other sources of employment. People were forced to seek work abroad, they were struggling to sustain themselves on the narrow terrace fields, found their livelihoods working in forests, or served as journeymen for wealthier landowners. There were no roads, engineering networks, the entire infrastructure consisted of a highway leading through the village, a church, and small scattered farmer schools.

Let us take a look now, impartially, at what are we handing over to the next generations.

We spent more than 750.000.000Kčs on cutting, shaping, welding, transportation, and manipulation machines and devices, machines for thermal and surface processing, by which we have created more than 2.000 working positions.

We have built complex infrastructure within the factory and town, from communications to engineering networks, electrification, sources and distribution of water, canalisation and a weak current network.

As a part of the complex residential development, we have constructed more than 1.000 homes and with help of our employees we have also built more than 1.000 family houses as well as a workers dormitory for 160 people.

We have built two elementary school campuses, two kindergartens, a supermarket, cultural centre, the town’s administrative building, and many other structures and premises.

We have built the recreational centre on Poľana, pioneer camp in Sebechleby, and the ski centre in Biele Vody.

We have built various environmental buildings, such as the neutralisation station, sewerage plant and the service water supply. We have reconstructed, expanded, and modernised the heating plant.

We have revamped the entire factory complex and modernised its production base, built a modern NC machines centre including a modern storage system.

Everything that we have achieved, with our people and for our people, is impossible to recount. There are too many things to list, it is almost unbelievable, but it is a fact.

I acknowledge that man does not live on bread alone, which is why we also took considerable efforts to elevate the cultural aspect of our citizens’ lives. Let the facts speak instead:

The average level of attained education in Hriňová had grown considerably.

We have acquired or trained more than 100 engineers, more than 800 middle technological workers, and more than 2000 workers obtained certificates of apprenticeship.

We have built the cinema building in the residential district Bystré, building of the company club ROH, youth club, and we have considerably contributed to the construction of the social club in our town.

We succeeded in managing and taking full advantage of these facilities.

We secured thousands recreational activities for our employees, both domestically and abroad, and for their children we have ensured participation in pioneer summer camps. For the employees we have organised numerous domestic and abroad excursions, we had partnership relations with the cities of Gomba and Mezotúr in Hungary, with the factory Delta Rzeszów in Poland, as well as with ČKD Napajedla.

Collective tours to various cultural sites were conducted regularly for the most accomplished departments, collectives, and individual workers.

We regularly assessed the most capable departments, collectives, and workers, whose efforts we also rewarded in appropriate ways. For this purpose, among other things, we purchased thousands books of the national and world literature.

With great care we also approached sport participation of our employees and citizens.

We have built a brand new multipurpose sport complex together with the adjacent administrative building, roofed grandstand, swimming pool, ice hockey floor, and many other sport facilities. We provided for active recreation of our employees and citizens.

We took care of our employees’ health and well-being, we have built the town’s medical facilities, as well as provided regular spa treatment for our employees.

The factory and the town formed a single unit.

In Hriňová we were living gregariously and happily, like a good family. The working collectives were meeting together monthly, often together with their families. We organised evenings to honour our most accomplished collectives and their respective workers every quarter of the year. We were able to reward one’s diligent work for our common good both materially and culturally.

Nearing the conclusion of this letter, I would like to leave a message to the future generations:

“Our generation of the factory workers comes to the end of its active life – we are leaving. Our lives, our work and its results, puts you—the upcoming generation—under an obligation to live and work purposefully, honestly and honorably for the good of generations that will come after you. Keep improving our factory and our town, so that life under Poľana becomes ever more happy!”

When you will—in whatever circumstances—judge the fruits of our labours, do not forget that we have acted as honestly and honourably as we were able to.

If we did not fulfil some needs of our employees and citizens, it s was only because we have exhausted our strengths in accomplishing other worthy tasks. It is up to you now to continue in our efforts and built upon our accomplishments.

I wish you lives at least as merry and beautiful as the lives that we have led—mindful of its purpose.

I wish you to revel in satisfaction of a work well done for a further growth of Hriňová.