Artistic Director and Choreographer of Lúčnica 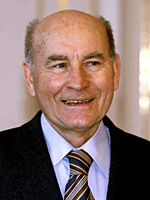 Born in Hriňová in 1927, studied at the gymnasium in Banská Bystrica where he graduated in 1947. In 1949, he began performing as a soloist for the dance ensemble Lúčnica and had  become its art director and main choreographer in 1951. Two years after, he graduated from the Faculty of Civil Engineering at the Slovak University of Technology, only to further continue in his studies — this time at the Academy of Performing Arts (VSMU) in Bratislava, where he graduated in 1957.

In 1968, Nosáľ began to teach at the latter of the aforementioned institutions. In 1972, he became the head of the VSMU’s Department of Dance. In 1980 he also acquired the title of Professor. In 1984, he published an academic textbook titled “Choreography of Folk Dancing”. During the years 1975-98 he produced for Lúčnica following programmes :

Nosáľ obtained multiple international and national awards (National Artist 1989, Order of Ľudovít Štúr 1997). Hundreds of successful dancers grew under his supervision, many of whom now work as choreographers or directors of professional and amateur dancing collectives. Through his work he gained thousands of ardent admirers all over the world.

In his own words: “I am glad that I was born in this land and inherited great spiritual wealth of its people. Many years of my life I have spent in constant discovery of and building upon its beauty; not only that which can be seen by the naked eye, but also that which adorns the soul.”

At the Town Council Meeting in Hriňová on the 7th November 2006, the council members agreed the motion to grant honorary citizenship to Prof. Štefan Nosáľ. At the occasion of the 115th anniversary of Hriňová’s separation from Detva, a ceremonial council meeting took place, during which Prof. Štefan Nosáľ accepted the honorary citizenship with gratitude.