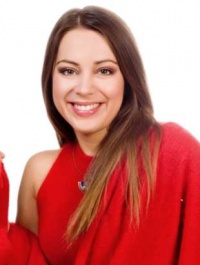 Sopranist Adriana Kučerová belongs to the youngest generation of Slovak opera singers. She studied at the Academy of Performing Arts in Bratislava as well as the Conservatoire Supérieur de musique et de danse in Lyon. She holds multiple prestigious awards, including: 1st prize from the national contest of Slovak conservatories in 2000;  3rd prize from the European Music Prize for Youth in 2001; 2nd prize from the international summer academy Prague-Vienna-Budapest in 2002; and most of all, 1st prize as well as the audience award from the prestigious Hans Gabor Belvedere singing competition in Vienna in 2005.

On the stage of the Opera of Slovak National Theatre she appeared as a brilliant Morgana in Handel’s Alcina; as a second niece in Britten’s Peter Grimes; and also as a first wood sprite in Dvořák’s Rusalka. First offer from abroad came to the young sopranist from Salzburg, where she performed during the Salzburg Mozartwoche in Mozart’s La Finta Giardiniera. An offer to perform in Milan’s La Scala followed shortly after, where she debuted in Purcell’s opera Dido and Aeneas. Recently she could also be seen in the Austrian Theater an der Wien, where she made appearance as Ninetta in the Fabio Luisi’s production of La Finta Semplice, and also in Glyndebourne Touring Opera, where she took the part of Adina in Donizetti’s L’elisir d’amore.

On the 26th October 2013 she received honorary citizenship of Hriňová for her work in culture and promoting the town and country abroad.