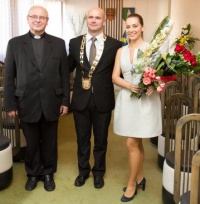 On the 26th October 2013 he received an honorary citizenship of the town of Hriňová for his lifework as a priest and scholar.