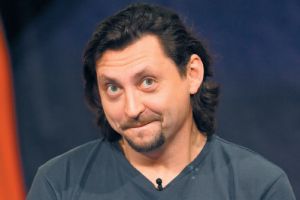 Lukáš Latinák was born in Hriňová. He first received training as a glassmaker, only to switch careers and study acting at the Academy of Performing Arts in Bratislava, together with other well-known actors such as Robert Jakab, Juraj Kemka, and Marian Miezga. He is a stable member of the ensemble of Astorka Korzo ‘90 theatre, and can also be seen as a guest actor in Slovak National Theatre. He took numerous minor and major roles in both Czech and Slovak films.

He received greater recognition among Slovak public together with actor Ľuboš Kostelný. They appeared in a series of long-running advertisements for an unnamed financial institution. He is most famous for his role as Karol Hurka in the popular TV series Profesionáli. In March 2009, Latinák has appeared, together with Róbert Jakab, as the main protagonist of the TV series Rádio Hijó. For a long time he was also a guest in the theatre-television show Partička and co-authored the TV series Vo štvorici po Slovensku.