History of our town

Traces of human occupation in the Podpoľanie region have been found dating as far back as the Bronze Age. These early artifacts were discovered in Detva: a neighbouring town with which Hriňová formed a single administrative unit until the very end of the 19th century. Podpoľanie began to assume its current shape as part of the historical Vígľaš county. Foundations of the Vígľaš castle, the historical centre of the region, were laid down by knights returning from the Crusades as early as the 13th century. First written records from 1393 mention the castle as a royal property. At that time, slopes of Poľana were covered by dense primaeval forests and thus the region had naturally become a fitting hunting ground for monarchs of the medieval Hungary. For this reason, a great number of local legends relates to the visits of king Matthias I. Corvinus to the castle.

During the following centuries, the region’s population rapidly increased in number. In 1638, Detva was first recognised as a separate settlement outside the bounds of the now neighbouring towns of Očová and Slatina. Hriňová came to be part of this newly acknowledged village. In 1811, Detva finally received town privileges. An increase in land cultivation, as well as an expansion of glassmaking industry into this region, led to a growing concentration of people in the area of  the present-day Hriňová. On the 21st October 1890, the Hungarian Ministry of Internal Affairs authorised separation of Hriňová from Detva. The town had become part of the Greater Slatina county. Municipal board of the Zvolen district ratified the constitutive by-law on the 5th of September 1891 under the number 322/1891. It is on this day that Hriňová came to exist as an autonomous town. Apart from the town of Hriňová (Herencsvölgy), several neighbouring hamlets and scattered settlements were also incorporated into this newly created administrative unit – namely: Krivec I. and II., Slanec, Mangútovo, Štoliansko, Gondova Jama, Biele Vody, Vrch Slatina, Magura, Snohy, a Vrch Dobroč. On the 1st October 1895, the state had established a registry office in the town. In the same year, the village of Detvianska Huta has separated from Hriňová, together with hamlets of Bratkovica, Komárno, and Vrch Dobroč.

At the time of its origin, Hriňová boasted only slightly more than 6000 residents. Human habitation in the area was sparse and irregular, and the individual agricultural communes were often far removed from one another. Majority of the population therefore found their livelihoods in land cultivation, livestock breeding, timber logging, charcoal production, at the nearby glassworks or the local steam-powered timber mill.

Mountain slopes of Poľana could only hardly provide fertile soil for local farmers. Deforested fields therefore proved to be a more suitable habitat for less demanding crops, namely barley, oats, wheat, potatoes, cabbage, flax, and hemp. Breeding cattle and sheep (herded in traditional chalets) was of particular significance. A considerable number of people found employment in the royal forests: they laboured as foresters, wagoners, and charcoal burners. Prominence of the latter can still be felt in the name of the settlement Uhlisko. Charcoal produced here was of good quality and exported as far as to Budapest.

Dense forests of Javorina and Poľana proved to be readily accessible repositories of spruce, fir, beech, ash, and maple wood. In 1860, Hriňová boasted three water-powered timber mills (located at the Bratkovský bridge, “u Peťkov”, and in Krivec) which belonged to the Vígľaš county. Thusly produced timber was put to use locally as well as exported abroad. Note: The aforementioned steam-powered sawmill was damaged by fire twice – in 1902 and 1922. After the second fire it was equipped with updated machinery. 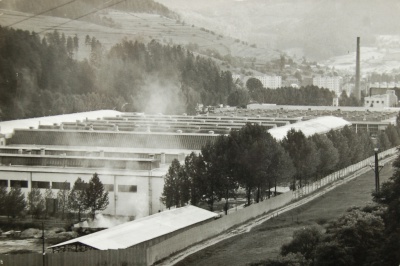 Apart from eight reciprocating and six circular saws, from 1905 onwards the sawmill also boasted its own narrow-gauge railway (i.e. 760mm). This railway was primarily used to transport logs from the surrounding forests (from Periská and Studená Jama at angles as steep as 40 degrees) as well as to transport timber to the railway station in nearby Kriváň, from which it was exported further abroad (e.g. to Germany, France, and Great Britain). The narrow-gauge railway remained operational until 1962, when it had to give way to the construction of a new dam. The water reservoir also swallowed up a water mill in the upper Hriňová—“u Štulerov”—which belonged to the Vígľaš county. The mill was equipped with two millstones and it was mostly used to grind rye into dark flour.

In the first half of the 18th century, a glass-making factory was established in Skalisko. Shortly after, in 1840, a new facility was built in Hriňová which inherited a sizeable portion of the equipment from the older glassworks. At the beginning, the factory only produced sheet glass. In 1895, after a fire and subsequent reconstruction, the factory also launched production of delicate cut glass. The glassworks was furnished with two wood-powered furnaces and the nearby quarry provided necessary quartz ore. Production could remain quite economical due to the rich supply of firewood as well as the fact that it did not require use of additional oxidising agents. Products of the Hriňová’s glassmakers were exported to all corners of the world—Russia, the Balkans, France, Egypt, or even as far as the USA, Japan, and Australia. The factory provided employment for five to six hundred people and operated under close supervision of first-rate experts. Every year it produced five to six thousand q of glass, that is until 1913, when a considerable increase in rental fees as well as prices of firewood rendered production unprofitable. On the 15th of February 1914, the furnaces had eventually shut down, machinery was put up for sale, and at the end of 1915 the factory found itself completely abandoned. Later attempts to revive the glassworks after the World War I were only short lived and largely unsuccessful. As a curiosity, it is worth mentioning that from 1879 onwards the employees were paid in factory-issued currency that could only be used for payments in the the adjacent shop.

The town’s peaceful existence was disrupted by the outbreak of World War I. The dissolution of the glassworks resulted in a severe lack of employment, as only the steam-powered sawmill remained operational. Some people were able to find employment at the construction of the roads connecting Kriváň with Kokava nad Rimavicou, and Hriňová with Brezno. Yet, during the years of the economical crisis, Hriňová suffered from alarmingly high unemployment rates, with more than 2.000 people having to seek work abroad, even overseas. Families with many children suffered from squalor, since housing culture and social conditions could only be described as less than satisfactory. The only medical doctor in the area was forced to commute from the nearby Detva and operate well above his capacity, having to attend to population of more than 16.000 potential patients. This resulted in low public health and high mortality rates.

Until 1918, Hriňová’s two public schools only offered classes in Hungarian language. In the remote parts of the town (i.e. scattered settlements called “lazy” which are characteristic for the region), elementary education was provided for by the so-called farmer schools, in which enlightened local farmers taught classes in Slovak. Teaching took place exclusively during the winter months and mostly focused on developing elementary reading and writing skills. These schools were in hands of true educational pioneers and it is mostly to their credit that out of 6.000 inhabitants of Hriňová, only 7% were illiterate. After 1918, additional public schools were built in Krivec, Slanec, Blato, Biele Vody, Dolná Riečka, and Priehalina. These schools also became centres of culture and adult education.

Under the Slovak state during the Second World War living standards had somewhat improved, owing to the fact that many of the previously unemployed workers were able to find jobs in road and railway construction (the railway track between Banská Bystrica and Diviaky; the road through Čertovica; and between Kriváň and Oremov Laz). This period of relative prosperity was overshadowed by the ongoing World War II, into which many of the town’s young men were forced to enlist. In autumn 1944, during the Slovak National Uprising, forests of Poľana witnessed an unprecedented activity, as they offered protection to more than 6.000 partisans, insurgent fighters, and fugitives from Nazi persecution. During that time, German soldiers executed 9 residents of Hriňová for helping the partisans. In spite of the Germans holding strong positions at Jaseňovo and Javorinka, first troops of the Red Army entered Hriňová’s territory on the 31st of January 1945, and on the 11th February last German troops retreated from the town.

After the end of World War II, the region began to develop at an unprecedented rate. This showed in construction of a heavy machinery factory (the “ZŤS”) in Hriňová, as well as construction of the nearby dam which became the main repository of drinking water for the neighbouring towns and villages. New developments brought new life to the hills as well as increased living standard and housing culture, on the other hand, however, they also disrupted the distinctively traditional character of the area.

Well preserved traditional architecture stands as a testament to Hriňová’s rich folkloric past. A fortunate visitor can still marvel at the beauty of houses from the 19th and the beginning of the 20th centuries in several of the town’s many scattered settlements – namely in Biele Vody and Vrch Slatina. These traditional houses were originally of wooden construction and somewhat resembled log houses typically seen in the Western countries. Gaps between the timbers were traditionally filled with moss and covered by wooden planks. The walls were either left bare or limewashed white. Comparatively more recent stone houses were held together by clay and their walls were also limewashed. Hip or gable roofs were covered with straw and in later periods also with shingles. Basic layout of these houses consisted of a chamber, antechamber and a pantry. Originally, large part of the chamber was taken by a stone oven, until it was moved over to the antechamber in later period. The house was prolonged by an attached cattle shed, which was in turn extended perpendicularly by a barn. Thusly fashioned farm yard typically also comprised of smaller wooden animal houses, wells, and a root cellar.